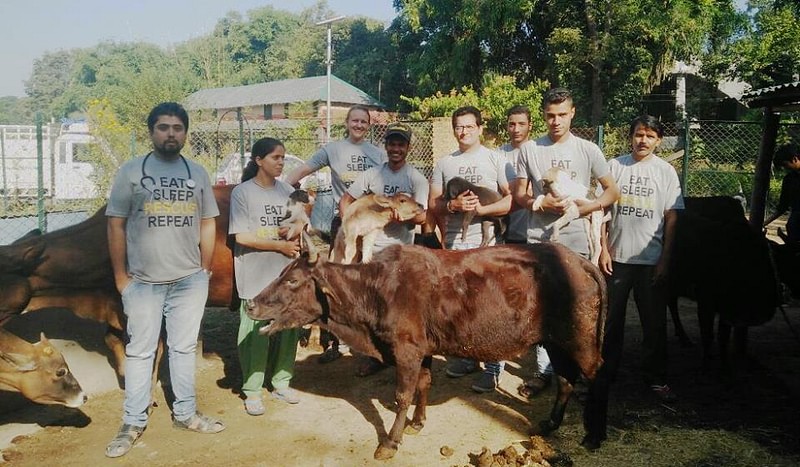 ” The greatness of a Nation and its moral progress can be judged by the way its animals are treated.”

We should be kind to every kind, not just mankind But only a few who dare to make the different choices. Today we are sharing the story of Mr. Robin Singh who quit his business and came back from the US Choosing the path of service – helping those who can’t help themselves.

Mr.Robin Singh and his wife Shivani had always a passion to feed stray animals and helping them since childhood but had left for the US in 2003.

While in the United States, Mr.Singh realised, No matter how carefully we live, we can’t stop doing harm to the environment and animals. With this thought, he even almost stopped consuming many things to make the least sufferings to the surrounding.

This thought encouraged Mr.Robin to leave his business in the United States and he came back to India to devote himself to this cause. At first,  He started a sterilization programme in Delhi and after that, he decided to move more closer to nature to Dhanotu Village in Dharamsala. This is how they started Peepal Farm in Dhanotu village, nearby Dharamshala in Himachal Pradesh, India with co-founders Shivani and Joellen in December 2014 where they started working for the improvement of life conditions of the stray animals, injured abandoned cows and dogs, and raising public awareness about animal cruelty. So they decided to do it in a way that involves and inspires others too. In the year 2015, after the completion of primary construction, the farm got open to people to volunteer and work in exchange for accommodation and vegan meals.

At present, this non-profit farm extended nearly one-and-a-half acres with an animal clinic, cowshed, and kennels. Apart from the three founders, the farm now has a staff of eight, including a veterinary doctor.

Till now,  Peepal Farm has rescued and rehabilitated around 300 dogs, cows, donkeys, mules, and horses. The farm produces all the organic products where they don’t Consume any animal product, including milk, in the farm.

It is the only place where large animals can recover in the large area, therefore the local admin refers such cases to Peepal Farm since 2017. Volunteers also organizing art projects to spread awareness to the public for kindness towards animals.

Peepal farm has been created with endurable items, such as mud, fetched wood, and stones. They work 24/7 throughout the year. They also run the ‘Desi Dog, Desi Log’ campaign where they try to adopt local dogs instead of foreign breed dogs.

Peepal farm also running an incredible Volunteer program where the interested candidates can look after the injured animals and also help around the farm. Peepal Farm also welcomes people offering to help with veterinary services, farming services, and gardening, etc. There is no charge for vets and farmers or people who can help spread the word.

Inspirational Story of Sarita Kashyap sells Rajma Chawal, she feeds food to the people even if they have no money.