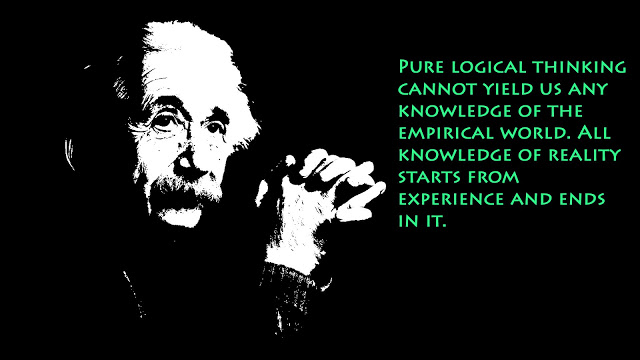 Pure logical thinking cannot yield us any knowledge of the empirical world. All knowledge of reality starts from experience and ends in it.

Since others have explained my theory, I can no longer understand it myself.

Matter is real to my senses, but they aren’t trustworthy. If Galileo or Copernicus had accepted what they saw, they would never have discovered the movement of the earth and planets.

When the number of factors coming into play in a phenomenological complex is too large scientific method in most cases fails. One need only think of the weather, in which case the prediction even for a few days ahead is impossible.

The ideals which have always shone before me and filled me with joy are goodness, beauty, and truth.

I assert that the cosmic religious experience is the strongest and the noblest driving force behind scientific research.

If I could do it all again, I’d be a plumber.

It is very difficult to explain this feeling to anyone who is entirely without it, especially as there is no anthropomorphic conception of God corresponding to it. The individual feels the nothingness of human desires and aims and the sublimity and marvelous order which reveal themselves both in Nature and in the world of though. He looks upon individual existence as a sort of prison and wants to experience the universe as a single significant whole.

If I were not a physicist, I would probably be a musician. I often think in music. I live my daydreams in music. I see my life in terms of music.

When I study philosophical works I feel I am swallowing something which I don’t have in my mouth.

I refuse to engage in an intellectual battle with an unarmed man.

One lives one’s life under constant tension, until it’s time to go for good

[O]nly if every individual strives for truth can humanity attain a happier future; the atavisms in each of us that stand in the way of a friendlier destiny can only thus be rendered ineffective.

If we have the courage to decide ourselves for peace we will have peace.

I do not believe in a personal God and I have never denied this but have expressed it clearly.

We shall therefore assume the complete physical equivalence of a gravitational field and a corresponding acceleration of the reference system.

Dear mother! Today a joyful notice. H. A. Lorentz has telegraphed me that the English expeditions have really proven the deflection of light at the sun.

I see a clock, but I cannot envision the clockmaker. The human mind is unable to conceive of the four dimensions, so how can it conceive of a God, before whom a thousand years and a thousand dimensions are as one ?

Generations to come, it may well be, will scarce believe that such a man as this one ever in flesh and blood walked upon this Earth.

Perfection of means and confusion of goals seem-in my opinion-to characterize our age.